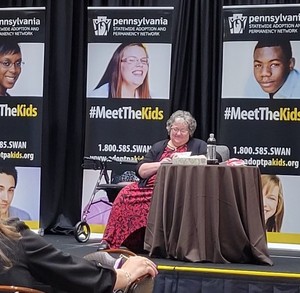 There’s a saying, “When we’re together, everything falls into place.” This could easily define the 2022 SWAN/IL Summer Statewide Meeting (SSW) and Pennsylvania Permanency Conference, which were held in person for the first time since 2019. The hallways and rooms of the Kalahari Resort were alive with the network reconnecting and learning, and throughout the week, attendees could be heard saying, “it’s so good to be back together.”

The SSW took place June 21 and 22 with  the Permanency Conference immediately following on June 22 – 24. This was a special year as the 30th anniversary of SWAN was celebrated throughout the week. SWAN Program Administrator Judi Damiano delivered the opening keynote of the SSW, When Miracles Happen: Celebrating 30 Years of Pennsylvania’s Statewide Adoption and Permanency Network, which featured stories from the network illustrating successes, big and small, of the program. Teresa Musser, director of SWAN and IL unit supervisor with the Department of Human Services, Office of Children, Youth and Families (DHS/OCYF), led the audience in the celebration of 53,055 adoptions finalized since the inception of SWAN.

The opening of the conference was celebratory with both Teresa and Jon Rubin, deputy secretary, DHS/OCYF, sharing opening remarks. A special video presentation reviewed where the network began, celebrated the numerous connections made for children and looked to the future. A highlight of the week was the awards banquet honoring permanency families, professionals and advocates. Articles on each of the award recipients will be shared on this site in the months ahead. They serve as inspiring reminders of the important work taking place on behalf of children in care, so be sure to check back often.

Rounding out the week were excellent keynote presentations by Dr. Dana Winters of the Fred Rogers Institute, who delivered Understanding and Promoting Everyday Human Interactions, and Jim Donovan, St. Francis University, who shared Music and Mindfulness Self-Care Strategies for Everyone. The more than 300 SSW attendees and nearly 600 conference attendees benefitted from a variety of learning sessions. Special thanks to all the trainers and panelists involved in the more than 40 workshops and institutes delivered across both events.

Mark your calendars for next year!  The SSW and Pennsylvania Permanency Conference will return to the Kalahari on June 20-24, 2023.